The human immunodeficiency virus (HIV) affects the immune system, which is the main defence mechanism of the body. Without it, the body is an open temple to diseases, some of which lethal. Note that, there’s no difference between the HIV symptoms in men and women.

HIV targets the white blood cells, also known as CD4++, which serve as guardians of the body. Loosing too many of them means that your body will be vulnerable to the infection.

If you are an individual with this condition, having knowledge about this disease can help you greatly. First of all, you must remember that there aren’t two people with the same symptoms at the beginning.  If we try to analyse a pattern, we can put the stages in the following way:

During the first two to four weeks, the HIV symptoms in men might include fever, body rash, headaches, sore throat, joint pain, vomiting and fatigue. These symptoms can carry over a period of two weeks.

Both men and women experience the same symptoms as stated before with one small difference. This disease often characterises with an unpleasant ulcer on the penis.

It can also lead to the poor production of sex hormones, also known as hypogonadism. Studies on this condition have been more thorough about men than women, as it is far easier to observe. The male individual might also experience erectile dysfunction (ED) due to the low testosterone production.

What is an asymptomatic period?

As we have said above, the first symptoms might continue between two and four weeks. Then, the virus might not cause any other problems. However, it will use the time to replicate and weaken the immune system of the body.

Even though that the individual might believe that he’s healthy, the virus would be gathering powers inside. This means that these people can easily transmit the condition to others. That’s why we highly recommend testing yourself every once in a while to prevent future consequences. 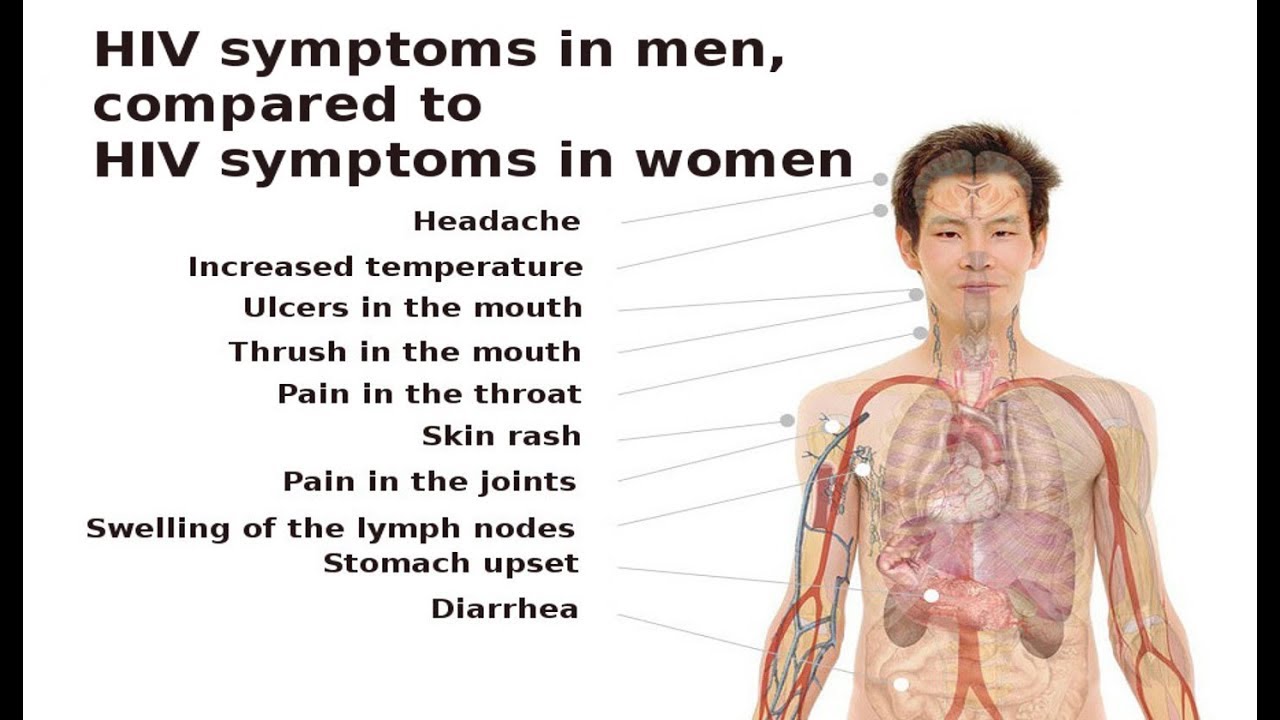 The last stage of the infection is known as acquired immunodeficiency syndrome (AIDS). We talked above about the white blood cells and how they get destroyed slowly over time.

Well, when the CD4+ cells reach a certain low number, the defence system of the body is destroyed. This could lead to cancer or infection, both of which can be deadly. Note that this is the last stage, which can take about ten or twelve years to reach without treatment. However, this period can be prolonged using specific medicines to protect the immune system from further damage.

The infections caused by the lack of cells are usually normal ones that our bodies fight with on a regular basis. Without those cells, we’re prone to infections and that is why people with the condition often experience colds and flu. Other known symptoms of the AIDS include:

The virus can affect both men and women as it passes through vaginal fluids, semen or blood. Having unprotected sex with a diagnosed individual will increase the chances of having one.

We recommend that all sexually active people or those who’ve used the same needles should consider an HIV test. It is recommended for people who use intravenous drugs because they’re a common factor for contamination.

Most hospitals and health centres offer HIV tests, which require only a small sample of your blood. If you’re not a fan of hospitals, you can also purchase a home HIV test kit and try it at home. It takes between twenty to forty minutes to determine the results.

The studies conducted over the past few years have shown that nearly twenty percent of all infected Americans, don’t even know about their condition. Not knowing about this disease could lead to multiple transmissions to healthy individuals. That’s why frequent testing is necessary for sexually active people. Try to employ these methods to reduce the risk of getting HIV:

Even though that we’re a technologically advanced race, there are still some diseases that we can’t cure and HIV is one of them. However, knowing your condition could allow you to treat yourself properly and improve the quality of your life.

Doctors have found ways to allow people to have near-normal life expectancy if the disease has been diagnosed early. It is of extreme importance to start treatment before your immune system is destroyed. Not only that but with the help of the doctors, the chances of transmitting HIV to a partner will reduce greatly.